We did it again 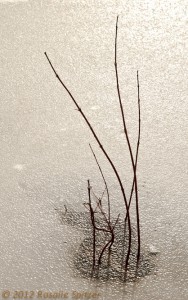 Rosalie and John had the same idea. Rosalie's is above.

Yesterday was another one of those winter days that made us wonder if we were still living in Central New York. A year ago it was a typical “snow, snow everywhere.” This year, for the second Baltimore Woods Winter Photo Workshop in as many weeks, we once again were faced with a snowless day to capture winter (which to us means snow) images. I doubt there are many tougher situation to face than a gray day, with various shades of brown as your primary subjects. As you’ll see below, real photographers know to emphasize lines, textures and contrast.

I wasn’t surprised by the efforts of all the photographers (both weeks) or the variety of images that came out of the weekend. Even though we know to expect it, the many different approaches to the same subject matter always proves interesting.   Yesterday was no exceptions.

Without the snow that is the norm for Central New York this time of year, participants has 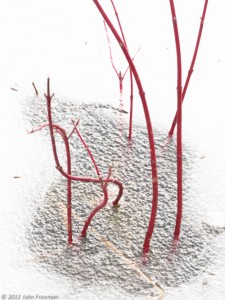 to exercise their eyes a little more, along with their creativity. They had to see lines, textures and contrast that they might have otherwise overlooked because old the more obvious snow.
The gray skies were typically eliminated from their compositions, yet the variety of browns could not be avoided. Whether shooting with asophisticated Nikon or Canon DSLR or a modest compact camera, participants spent a lot of time thinking about depth of field, often opting to open up their aperture to assure soft, uncluttered background. I think some were amazed at what they could accomplish, even with the less  sophisticated camera.