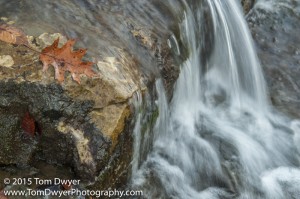 My first composition gave emphasis to the falls.

“Turning-on an old leaf” was supposed to be a play on words . . . sort of like “turning over a new leaf.” Okay. Doesn’t exactly work, I know.

What I wanted to get to though is the importance of really working a subject. Different angles, perspectives, shutter speeds, f-stops, etc. All trying to tell a story. In this case, earlier today, I took my hour away from the office and visited Carpenter Falls. Normally, this time of year we’d have some of the white stuff to work with. Obviously, I knew before I pulled out of the driveway that this wasn’t going to be the case today. Still, I expected that the falls itself would be interesting. 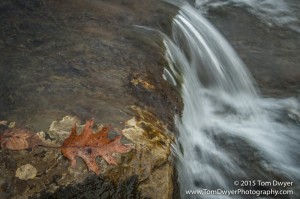 Then I positioned the leaf to give it more prominence.

Actually, there was more water than I’m used to seeing, but the drabness of the whole area, what with only left-over autumn to work with, didn’t lend itself to wonderful waterfalls compositions. So, I had to look a little loser. I started by focusing on a couple foot-high cascades above the main falls (like the header of this post), but it wasn’t really working for me. I couldn’t seem to “see” something I really liked. 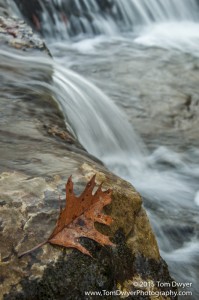 Next I wanted it to share the limelight with the falls.

Then I noticed a single leaf caught in the undertow of one of the mini cascades. But, it was deep enough that its color was “washed-out” (no pun intended) and the flow of water made it indistinct. So, I didn’t even frame a potential grab. What to do? 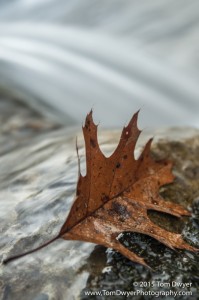 There were other efforts, but ultimately I settled on making the leaf the primary focal point with the falls in a supporting role.

I decided that I’d find a leaf and position it where the original one might have been at an earlier point in time. I know, there are some who poo-poo moving anything to help compose a photo. I’m not one of those unless I’m trying to say “this is the way it was.” In other words, I’m not going for a documentary image any more than a painter standing at the falls who might not include an intrusive branch or who might add some color in search of a “pretty” picture. 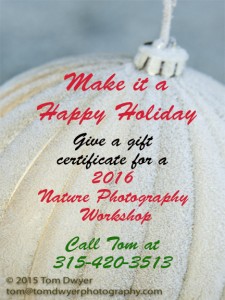 Today, it wasn’t even the pretty picture that I was after. I really just wanted to see how different takes on this “leaf on a rock” could be achieved.

I ended up liking one(at right) much better than the others. What are your thoughts?