Taking advantage of a storm

If I were a betting man, and I’m not, I’d bet the just past mid-March snow storm will be the last significant blast of winter for the 2016/2017 season. While the temptation was there to join the chorus of moaning and groaning, instead I decided to take advantage of the storm. After all, we really haven’t had much of a winter . . . or at least much in the way of photogenic snow, this year. 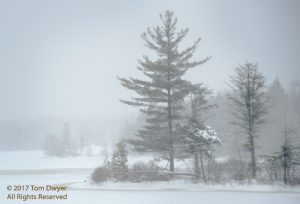 I had to work on Wednesday as I was met with heavily falling snow and a very low contrast environment.

So after getting plowed out and doing some snowblowing on Wednesday morning I decided I would pack up for a trip north. My wife put some hot soup in the thermos and added a complement of lunch items while I packed for an anticipated cold night in the back of my pickup. 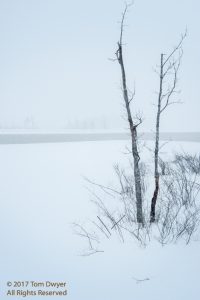 I decided that the broad landscape needed to succumb to a tighter composition. This one, with the distant trees barely visable, seemed to capture the wintery feel I wanted.

My destination had been decided over the previous weekend to and from a quick getaway in Lake Placid. Both going and coming we drove  on Route 3 past the Grasse River outside of Cranberry Lake. Now, I recalled remarking that I needed to get back to photograph the river. At the time I was expecting my return to be after spring had gotten well entrenched, not less than a week before it arrived. And, of course, not with a couple feet of fresh fallen and blowing snow. 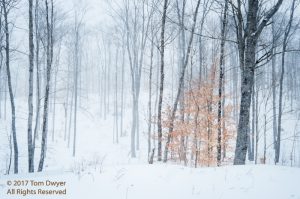 As the wind and snow continued to blow I looked for a little color to “brighten” things up.

I promised I would turn around if the drive became too treacherous. However, as I headed north on Interstate 81, toward Watertown, only a few sections were actually all that wintery and they were not treacherous in the least. Once through Watertown the snowfall did get a little heavier, covering the highway with a light coating. Still, I decided to take a peek at the conditions on a couple side roads and turned north along the Oswegatchie River. The snow continued to fall, the roads had a few inches of snow (better for driving than a slick inch or so, actually) but not enough to make we want to turn around. 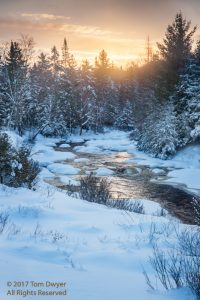 In addition to a bright moon-lit morning the Grasse River was accented by a pleasant “warming” sun.

After a couple hours of “exploring,” and stopping several times to frame a few shots I decided I needed to confirm for myself that I would find somewhere I could actually safely get off the road for the night. My luck held and I was able to get a good night’s sleep in the parking area adjacent to the Grasse Rivern. Remind me sometime to tell you about the snowplows that were able to “squeeze” past my parked Silvereado several times during the night. 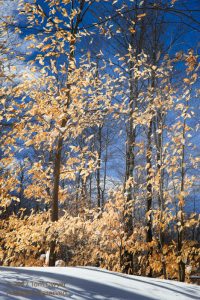 As the sun rose higher in a sky I enjoyed the contrast between these golden leaves and the deep blue sky.

As I texted my wife, “I was snug as a bug in a rug” in my sleeping bag and slept well before arising just before 6 am to a cold morning (8 degrees) and, to my delight, a bright moon in a virtually cloudless morning sky.

Like the preverbial kid in a candy store, I enjoyed a couple hours on the river, followed by several hours retracing my drive from the day before. Like a jack-in-the-box I was in and out of my truck more times than I can count, happily trudging through thigh deep snow on the banks of the Oswegatchie as well as the northern stretches of the Grasse.

I found our latest snows challenging in some ways but overall exhilerating. The best winter shoot of the season for your’s truly.

Ok spring. Bring it on.

PS: Before I forget it, I have an article in the spring edition of ADK Local magazine that’s just come out. Here’s a link if you are interested. ADK Local-Spring