Some days just don’t lend themselves to photography. Right? Well, that depends on what part of photography you’re interested in on any given day. I went searching for a couple snaps today, but the heavy overcast sky did more than dull the landscape, it pretty much soured my mood for patrolling the landscape as well. So, I went home rather quickly and got into another element of photography     and it’s one I particularly seem to have an affinity for on gray days. There’s something about a crackling fire in the fireplace and a good book about some element of photography, any element actually, that has the power to turn a gray day into a valuable, even enjoyable day of photography. 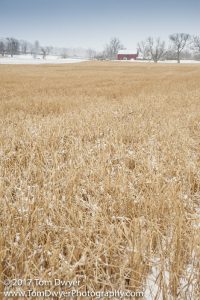 Today the book wasn’t really even a true book. Rather, it was an article on a website that’s become one of my favorites recently, Lenswork.com. Today was the first time that I came across one of the many things on the website that are available to subscribers only. I found it under a heading that looked like it ought to be a magazine or maybe even a book. It was titled Looking at Images, Vol. 2. Turned out it was a collection of commentaries on a variety of photos.  One of those commentaries featured a black & photo with a plowed farm field, a barn and a beautiful sky. Right at the half-way point and the horizon (I know we’ve been told to never put the horizon in the middle of our images) was the country barn and the icing on this cake was that sky filled with white, fluffy clouds.

The interesting part of this commentary was called The “Rule of Threes.” Not the “Rule of Thirds,”  the “Rule of Threes.”The article made the point that every photo needs to have “three interrelated components that support each other. If a photograph has three components, it’s a much more solid foundation than if there is only one, or two,” it concluded. The image being commented on had the farm field leading your eye to the barn, capped by an interesting sky.

Three components, the Timothy weeds in the foreground, the icy pond and the trees at the shoreline…three more components.

As it happens the image reminded me of one of my own, (seen above) captured only a couple days ago as we drove south in an unsuccessful effort to photograph some waterfalls in the Ithaca area, an effort thwarted by the filming of an I love NY commercial at Taughannock Falls.

I immediately went to my Lightroom catalog to see if my image had the three components suggested in the “Rule of Threes.” I guess I could convince myself that it does. There is the nice golden foreground, my red barn and a nice blue sky. I’m not looking back at success, however. More importantly, I’m looking forward to a future image that I expect to have in my collection. Perhaps it will be captured this coming spring, when the wheat fields are being freshly tilled and the sky is filled with those white clouds that we all like.

But, that’s not the real value is it? The real value is the idea this image commentary has planted in my mind . . . the “Rule of Threes.” I’m not big on rules, but more so in the way some rules can help us see our images before we click the shutter. There’s the real value.