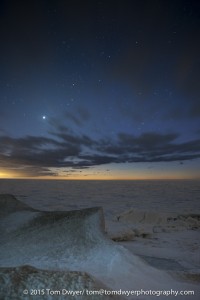 I should have made that a big BUT. A huge BUT, actually.  Tommy and I decided to head back up to Lake Ontario again tonight. We’d tried photographing the Aurora Borealis for our first time last night and the National Oceanic and Atmospheric Administration (NOAA) website seemed to be showing the possibility of a second appearance tonight and, the local weather forecast was promising skies clear enough that, it the dancing solar winds were to make a second appearance in two days, we thought we might get a second 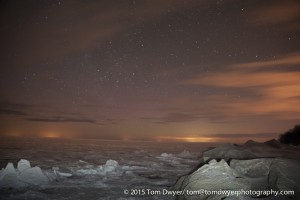 A little light painting took a few tries to be little enough, but it was able to provide enough detail to provide interest to the foreground.

shot at photographing the Northern Lights.  It sounded promising enough to make it worth the effort and the hour and a half drive from my home to Lake Ontario.  Tonight, I decided,we’d try a different location, the Sterling Nature Center, west of our location last night and we hoped a little shorter on the ambient light.

So, off we went. Alas, (here’s the “but” part) no Northern Lights . . . Still, a marvelous light. I think much of what we composed was colored by ambient light from the nearby Village of Sterling or maybe even the Village of Hannibal. But, (there’s that word again) combined with the scattered clouds and a little light painting on our part, we would return home with some images we were pleased with. 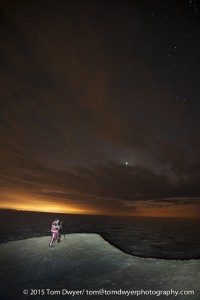 I couldn’t rest trying this one and Tommy was patient with me, standing still for the 30 second exposure. I did a little light painting and then burned in the area around Tommy in Lightroom.

I had only tried the light painting a couple times before tonight, but never with any real good fortune. Tonight I had a more powerful beam which was both good and not-so-good. It took a little patience and a number of 30 second to 1 minute exposures with a variety of light painting efforts to come up with enough foreground to be interesting and not so much as to be distracting. It was certainly a hit or miss effort on my part.

But, (okay I had to throw one more but in here) it was a second enjoyable night and I’m certain we’ll be trying it again . . . hopefully soon.