Why couldn’t NANPA’s Nature Photography Day come on a day when I could just chill-out and spend some time taking photos? The answer is . . . . because. And that’s a good answer as I can come up with.  Despite the fact that today was Father’s Day my to-do list was long. But, because it was Father’s day, it was all things I wanted to do,but long none-the-less. We did spend a few minutes with a cup of coffee and some Sunday morning reading, then decided that neither of us wanted  breakfast. So, it was outside into a very cool morning. Temps were in the low 50s, which wasn’t bad for working in the garden. 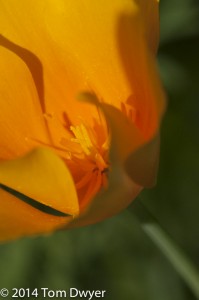 This was my first composition and the closest to what I set out to capture.

Lots of weeding, some feeding, and some spraying (a new critter repellant that was a Father’s Day gift), spraying the apple trees, etc. Doesn’t sound like much but it took the whole day…the whole beautiful, in the 70s kind of day.

Before I knew it, it was 5 o’clock and I knew I’d be being called for dinner soon, so I hurried to get out my camera gear. I had decided somewhere along the way, in the middle of weeding likely, that I’d get my Nature Photography Day photo without leaving my yard…appropriate I thought since I so often preach the value of photographing in our backyard. The challenge was that I decided my subject today would be found in some wildflowers I had planted in the side yard. (Wildflowers I’d planted? Can you still call them wildflowers if you purchase seed at Home Depot>)

When I was mowing the lawn earlier in the week, I’d caught a glimpse of a California Poppy in the wildflower garden. Naturally, I assumed there were several. Again naturally, after I hauled my gear garden-side, I could only find one poppy blossom. Still, it was beautiful in the bright sun, surrounded by dense green leaves of other plants. So, despite the aches and pains from the day in the garden, I got down on the grass with my tripod and my camera bag close by. 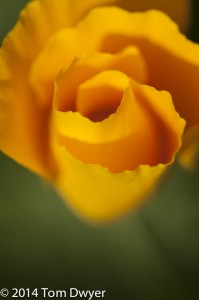 All of a sudden the poppy was closing-up on me. This ended up being my pick for Nature Photography Day.

Of course it wasn’t until I was down that I remembered that I had a new short post for the tripod that would allow me to get lower to the ground, so I clawed my way upright and went to retrieve the post. Back on the ground, ready to compose my photo, I realized I should be using a polarizer. Since I was using my Nikkor 105 mm macro lens for the first time in months, it didn’t have the step-up ring to hold my Cokin filter holder on it. That meant two more trips back, first to get the polarizer and then to get the step-u ring. Finally, despite myself, I was ready to get into this project. It should have been a simple shoot, but I had managed to make it a challenge.

Back down on the ground I began to compose my shot. I was happy that the sun was over my shoulder and would allow the poppy to really shine. Of course when I’d lean over my camera, I’d put the flower in full shade of my body. Okay, this is digital photography, so I can make a good guess at the correct exposure and make adjustments until I get it right. Normally, when working this close to the ground I’d want to compose my image using live view. The sun coming from behind me was great for the image, but made composing with live view basically impossible, even with my Hoodman Loope, So, I had to contort an already struggling body even more to get my eye behind the view finder.

By now, despite still being in full sun, the poppy blossom was starting to close. The George Lepp”ish” image I was anticipating wasn’t there and I had to rethink this a little.

All week I had visions of walking somewhere close to my home to capture my Nature Photography Day image in a relaxed, leisurely day. Now I just wanted to get it over with, hoping I actually had an image. 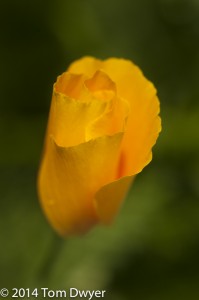 When I was called to dinner, I had time for one more shot.

I could hear my name being called from the back deck. The anticipation of barbecue spare ribs, salt potatoes, corn on the cob and strawberry shortcake quickly had me ignoring this aching body. If I didn’t have the image I wanted, I still had time to head out after dinner.

If you captured your Nature Photography Day photo today, I hope it was as memorable a day for you.

If you were able to get some photography in yesterday, pick your favorite and upload it to Nature Photography Day. It’s free and you’ll join an ever-group community of nature photography enthusiasts. Then, too, you’ll be able to view your image with many others from around the country, maybe even the world.