Doodling. That’s how I would describe the few moments I spent playing with my iPhone camera, while stranded at the San Diego airport last earlier this week. Due to poor scheduling on my part, I ended up at the airport hours before my scheduled red-eye flight back to the east coast. Too early, as luck would have it, even to be allowed to check my 50-pound suitcase. 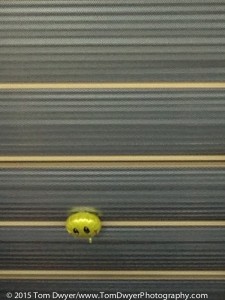 This balloon was what first motivated me to go for the iPhone camera.

So, I either had to lug it (and my briefcase, and my camera bag) around the airport or I was pretty much shackled to a chair in the ticketing lobby.

Oh well, I could use the time to catch up on some reading and review my notes from the NANPA Summit that was the feature of my week, along with four or five hundred kindred spirits. So, I parked myself in a reasonably comfortable chair by the sunlit terminal windows, resigned to make the best of it. 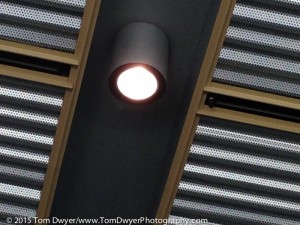 As with the balloon image, it was the lines on the airport ceiling that I found interesting here.

It didn’t seem to take too long for the lack of sleep for the long and inspiring Summit days, combined with a cold my roommate from the Chicago area had graciously shared, to get the best of my attempts at reading and decoding my notes. Soon, I was looking for other ways to occupy my mind and my time…short of sleeping on public display.

Of course I had to play with the iPhone’s panorama feature.

Aware of the iPhone prowess of folks like Frans Lanting (one of the keynote speakers at the Summit) I’m embarrassed to say that I’ve really only “played” with my iPhone camera on a very few occasions. I have used it to take photos at Gallery 54 in Skaneateles, NY (where I’m one of several co-op owners). It has worked well to capture images of art in the gallery…images we can use on the gallery website and in the gallery blog. 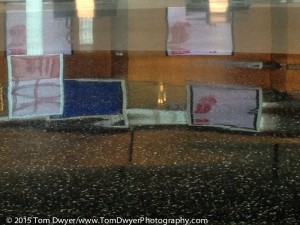 I don’t know which image captured the way I was feeling more accurately. This reflection in the airport floor, or . . . .

Aside from that, on one occasion while in New York City, I played with the iPhone camera in Madison Square Park. But that’s really about it. I keep meaning to get serious with what is really a serious camera . . . 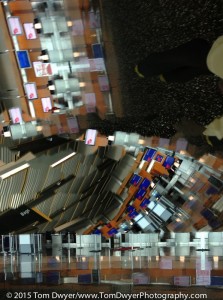 This multiple exposure image . . . Okay. This is the winner in the feelings department.

Still, I can’t say I got serious while at the airport. This was more like doodling with a cup of coffee in one hand. But, it wiled away a few minutes. I wish I had been more awake now that I see the possibilities I failed to see at the time.

Here’s to the “fine art” of doodling:)