There’s an old saying about the month of March that goes something like, “In like a lion, out like a lamb.” Honestly, I don’t remember what the weather was like the first few days of March, so I don’t know if I should think that we’ve seen the last of winter yet. I was somewhat surprised when I woke up Sunday morning to three or four inches of fresh, wet snow. 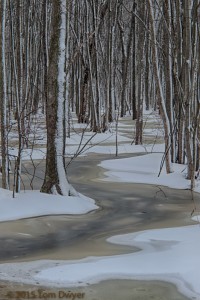 Still, while most people seemed to think, enough is enough, I saw it as perhaps my last opportunity this season to grab a few more winter photos.

On Friday last, a lady at the reception for the opening of my show at Baltimore Woods wrote directions on a napkin, guiding me to the Great Gully Falls, south of Union Springs. That’s where I was headed when I left the house around three o’clock Sunday afternoon. 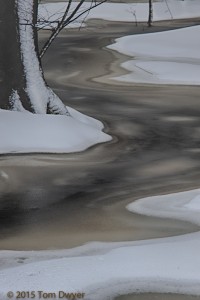 With a little looking around, I began to see the designs in the water.

But, the best laid plans, I was distracted by a roadside scene along Rt. 20, east of Auburn and just outside of the Village of Skaneateles. I doubt I can adequately describe the scene except to say tall, leafless trees, standing erect in acres of slightly frozen water is what caught my eye. Maybe the photos here will provide a better sense.

After shooting for about an hour, I started east on Rt. 20, thinking I’d go to my original destination. 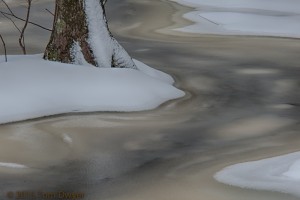 And a little closer again, before heading off to Bucktail Falls.

Within a couple minutes though, I decided that the light wasn’t all that great and the mile hike I was anticipating into the falls, would likely get me there too late for much photography. So, a quick u-turn found me headed to nearby Bucktail Falls, near the south end of Otisco lake instead. Besides knee deep hard-crusted snow, the walls 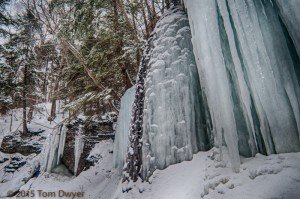 The ice at Bucktail was truly beautiful.

surrounding the falls were covered with layers of ice and the water below the falls frozen over, allowing me to get much closer that I have in warmer times of year. It was a nice shoot. 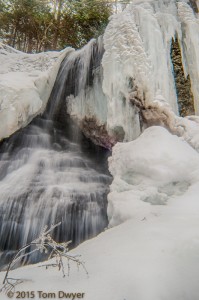 A perspective on Bucktail that I’ve never been able to get before, without the ice below the falls.

While I’m ready for spring, I can’t say I’m unhappy for this weekend’s snow or that I’ll complain if we get another. One way or another, there will be something new to shoot as winter wanes and spring blossoms.

You gotta love it.