If  you have just checked in, it might be helpful to recap why I’m writing about photography what I am in this series. First, I mentioned that I wanted to share the experience I enjoyed in late February and early March of this year in Death Valley Natiional Park in California. More, I hope to share my experience at Guy Tal’s and Michael Gordon’s Visionary Photography Workshops. I attended two while in the desert. I have to admit there is also a self-serving motivation for sharing this experience. I’m using this as a means of disciplining and motivating myself to thorougly review my notes and recordings of the workshop sessions, hopefully assuring as much benefit to my personal photography as possible. 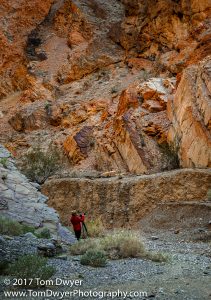 This whole scene, visually, is seen at once with the small, red jacketed person immediately communicating scale versus the warm red rock walls

Already, this is proving to be a huge task. There is so much to share. I’ve already found that even though I tried to keep copius notes and managed to bring home audio recordings of each session, there are some things that I need to research and study further before I’m able to share with clarity. It’s my hope that if anyone finds anything in this series to be unclear that you will give me the opportunity to clarify. You can always make a point or leave a question in the comments.

I already introduced the concepts of verbal and visual languages. Verbal being the spoken or written word and visual, in our case, applying to the photographic image. Today, let’s look at  some differences between the two.

I’m going to start the same way Guy did by suggesting that something, in our case a photo of a scene, may look nice and warm because of the colors that are predominent, but actually be of a scene that is snow and therefore in reality cool or even cold.

This illustrates one of the important differences between visual language and verbal language. A simple description of verbal language (perhaps somewhat over simplified) tells us that verbal language communicates fact, reality, details, etc.. It can tell us “This is blue, or it is wet, or it is hot,” or it’s size or weight for example. Unless there is some reason to disbelieve what the verbal language is telling us, we perceive it literally.

Visual language, as in the example of a warm looking image that is actually of a cold scene, is often imprecise because of its ability to insinuate feelings and/or to be ambiguous. As a photographer trying to create photographic art, we are 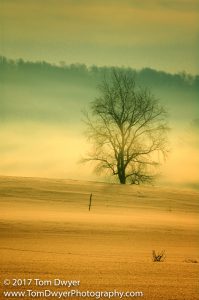 Despite the fact the foreground is snow, the golden glow from the morning sun along with the bright fog in the background creates an instant warm feeling.

interested in sharing how we feel about our subject or how we want the viewer to feel, not just what it looks like. As if this challenge isn’t great enough we have to contend with the fact that those who will view our images may be from cultures different from our own, with different backgrounds, different values and experiences, and therefore different responses to what they see.

Visual language is symbolic or metaphoric. Therefore, colors may give most of us a warm feeling, despite the reality being cold. Lines and shapes cause us to respond is certain ways. Size and position of subjects in an image cause different (often predictable) reactions and responses in the viewer..

Still, all communication is about interpretation to some extent. When we read verbal communication, we read words, phrases and sentences and at some point the collection of words communicates meaning. One word + another word may = a phrase. A few words + a phrase may = a sentence. A collection of sentences becomes a paragraph and somewhere along the way this linear construction communicates “facts” and/or a sense of something, even a feeling.

An aside: one point made during the workshop was about the saying, “A picture is worth a thousand words.” This seems to indicate that a picture communicates better than words. In fact, a skilled writer can communicate fact and feeling whereas a photo will often come up short on the facts (or both). In a photo a rock may look huge while actually being quite small whereas the written word can be used to accurately communicate size, color, weight, etc. 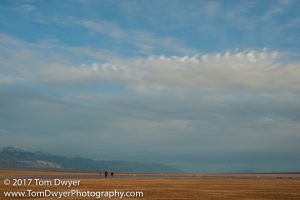 The combination of sky and dry lake bed, with the distant human forms creates a feeling of vastness.

We don’t see the big tree, then the empty field, then the fence, then the fog or mist. We see it all at once, instantly, and instantly we perceive meaning. All the lines, colors, shapes, textures, highlights and shadows come through at one time and create one meaning.

Now here’s a word I have to admit I never used before Guy introduced it to us in Death Valley. “Gestalt.” It means “an organized whole that is perceived as more than the sum of its parts.” It’s the gestalt of an image that, because of its colors, may “feel” warm, when the scene is actually cold, for example. Despite what else may actually be part of the image, a dark alley may be perceived instantly as dangerous or mysterious. The size of a person in an image combined with the height of a rock wall and the wall’s colors will leave an immediate impression or feeling. The question isn’t, “Is it an accurate depiction of the scene.” The question that photographers seeking to create artful, meaningful stories with their images need to ask is, “Is the way I use my visual vocabulary communicating what I want to communicate?”