Close-up works for the holidays

My friend Sue Morison will photograph almost anything, except weddings, she says. A few days after a session on close-up and macro photography at my Getting Ready for Winter Photography workshop earlier this month she was out with here camera putting it through its paces on Syracuse, NY’s Clinton Square. This is the first year the city has erected an artificial Christmas tree in the popular square and Sue was anxious to see what she could create with her camera. 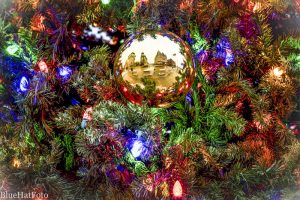 “I went to this colorful and festive venue with my 24-70 mm lens, not expecting what I found,” she says. “I wish I had brought a longer lens with me but I was happy with what I was able to come away with.” Why was she wishing she had a longer lens with her, you might wonder. It’s because the subject in the photo here was an estimated 15-feet off the ground. Still, a pretty nice job, I’d say.

“I could see the bank buildings just east of the holiday tree reflecting in the ornament and that reflection became the focal point of my photo,” she said. To create this image her Canon 80D with a 24-70 mm lens was firmly attached to her tripod and cranked out to the full 70mm. But, that that wasn’t the work. With the ISO set to 200, aperture at f/8 and a 1/5th second shutter speed, she found one more setting was necessary. “In order to not have my reflection in the ornament,” she says, “I set my shutter release for a 10-second delay to give myself time to get out of the photo,” she adds with a chuckle.

More than a photographer of pretty ornaments

There’s a lot more to Sue’s photography than holiday decorations, for certain. While she has been taking photography seriously for only about eight years Sue has found real satisfaction though through her volunteer efforts. At the outset, she never thought she would enjoy photographing people. It’s safe to say that the Make-A-Wish Foundation of CNY is grateful she’s warmed up to people photography and moved outside of her comfort zone. In addition to other volunteer efforts, Sue regularly photographs children whose wishes are brought to life by the Make-A-Wish Foundation. This year is the second that the foundation has published a calendar featuring Make-a-Wish recipients in photos . . . each created by Sue.